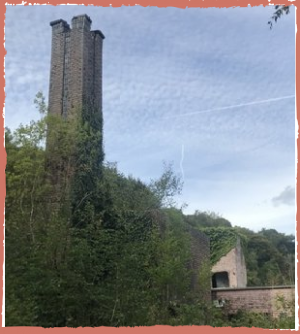 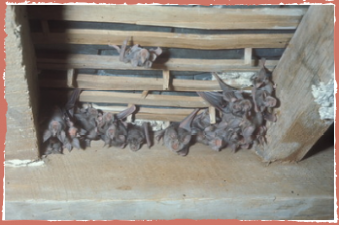 BACKGROUND
As part of the planning application for the Upper Level buildings, Steve Wadley, director, of AVA Ecology Ltd, of Osbaston, Monmouth, undertook a bat survey of the Pay office, the Lamp room, the Workshops, the Electrical Out Building and the Bath House. AVA Ecology were selected after a tender process had been undertaken with three survey firms. (Click here to visit AVA website)
The bat survey expanded on the Acer Ecology 2015 report which deployed static detectors in late January 2016 from which a single Pipistrelle bat was recorded, near the entrance to the underground room at the Power House. The Acer Report recommended that bat flight and emergence surveys of the buildings be carried out for bats during the optimal bat survey period of May to September.
Meetings were held on 30th April 2019 and 26th June 2019 with Margaret Isles, principal ecologist at Caerphilly CBC, to discuss the site habitats and survey design. The presence of Greater Horseshoe bats and Lesser Horseshoe bats in the Bath House was discussed and Natural Resources Wales (NRW) were informed of their presence. According to Steve Wadley the biodiversity at the site was reported to be excellent, with a matrix of old large buildings, underground areas, scrub, woodland and a waterway corridor (bridge/culvert) which made it an important area for wildlife. It was recommended that surveys be undertaken following Bat Conservation Trust and Chartered Institute of Ecology and Environmental Management (CIEEM) guidelines and which would include:
(i) a transect survey/vantage point survey of the site to assess bat activity around the buildings in mid-May or June, including the installation of a static bat detector in the Bath House for a period of 2 weeks in June and July to confirm the presence of Greater Horseshoe bats and Lesser Horseshoe bats;
(ii) two bat emergence surveys (one at dusk and one at dawn) of the 2 buildings proposed for development;
(iii) the installation of a static bat detector near the culvert/bridge in June or July to assess use of the river corridor by bat species; and
(iv) the undertaking of bat emergence surveys at the Bath House to assess how the bats are using the buildings, in order to inform any enhancement or mitigation which would be required.
SURVEY RESULTS
A bat transect survey took place on 29th July 2019 (8.30pm to 11pm) and the three bat emergence surveys took place between 8.30pm to 10.45pm as follows: Pay Office and Lamp Room on 13th August; Workshops and Electrical Out Building on 14th August and Bath House  on 15th August.
Foraging and commuting bats included the following species: Noctule, Long eared, Natterer's, Soprano pipistrelle, Lesser horseshoe and Common pipistrelle. However, bats were only recorded as emerging from the Bath House, and this was confirmed as a night roost of around 8 Lesser horseshoe bats, a day roost for 1 Long eared bat and a night roost of possibly 2 Greater horseshoe bats.
No bats were seen to emerge from the other buildings surveyed, although around 20 Soprano pipistrelle bats were seen foraging to the north of the site, between the Power House and the Bath House, and a maternity roost of Pipistrelle bats was located nearby.

In addition, Barn Owls were confirmed as nesting within the soffits of the Fan House and were entering this building at the south east corner via a damaged soffit box.
CONCLUSIONS
The survey concluded that if any development or further work to the Bath House was carried out then a bat mitigation licence  would be required from NRW. However, all other buildings surveyed were free of bats and therefore no additional survey, or licence, was required for them.
As part of the bat mitigation procedure the Boiler House was inspected by the bat surveyor and is considered to be a suitable building for the location of a bat house for the rare species of bats found on the site. The building was used to house the boiler which heated the water for the Bath House and has a large chimney which reflects the design of the larger main chimney on the site. The chimney of the Boiler House is likely to provide daytime roosting bats and may also have high potential for hibernating bats, depending on whether the upper sections of the chimney are left open or sealed.
To be bat friendly the Boiler House interior would need to be modified to allow enhanced roosting opportunities.  This would include roosting areas as shown in the plan below.  However, the access to the chimney internally would be retained in situ.
The bat survey concluded that it is considered more appropriate and beneficial for bats if the Boiler House is used for the site's bat mitigation because it has a greater thermal mass and provides a more suitable structure. It is also without windows, and so is darker inside and would be much easier and practical to convert into a dedicated roost.

It is hoped to source grants for the work to make the Boiler House bat secure and this work will commence once all permits are in place.